My grandmas and -pas had a healthy appetite and a robust digestion (I inherited that trait). But my more notorious grandma didn't like to be called eupeptic. She thought it sounded like an insult, even worse than dyspeptic.

But she did have a predilection for piquant food. To counter the plebeian allegations of pepticism, she used to add a lot of all kinds of exotic peppers to her cooking. She was the precursor embodied to Pepper Potts. I guess I inherited my grand's pepperdilection for spicy recipes.

Your ability to evoke your grandmother's peppery personality with mere words makes this forum topic fun to follow. Being able to "see" your grandmother is much appreciated. It makes me feel downright eupeptic! Thanks.

Pronunciation: /tenˈdenSHəs
adjective
expressing or intending to promote a particular cause or point of view, especially a controversial one: a tendentious reading of history The US Congress has become a complex mix of tendentious factions. Designed as a dynamic "legislative body", it has recently seemed to be more a dismembered zombie.

[Not that I have a particular point of view about it.]

verb
[no object] Back to top
keep a private, romantic rendezvous: (as noun trysting) a trysting place You ought never trust
To the promise of tryst.
You may hope if you must
But may not insist.

Your lover's first kiss
Is never the best.
Mere start is a miss
Lest follows the rest.

Origin
1940s (originally denoting a design left by a transfer): probably an alteration of decalcomania. 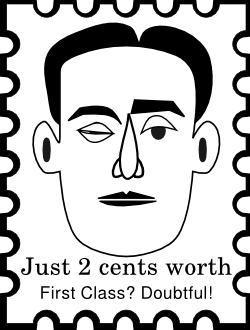 It is just a cockamamie concept that anyone would have a mania for decals. Stamps, coins, little ceramic figurines, maybe, but decals?

Grandpa had been using the medecin man's potion for a while.

During the intermission of the opera, he whispered to grandma, "You know, darling, I had my doubts at first, but that concoction is not cockamamie after all. I'm so glad it works.".

With a short glance downwards, grandma replied,"I noticed. Don't look now, but do that again later, when we're back home!".

Pronunciation: /granˈdiləkwənt
adjective
pompous or extravagant in language, style, or manner, especially in a way that is intended to impress: a grandiloquent celebration of Spanish glory

Harry was a grandiloquist. He only had to walk into a room to induce everyone inside to begin long, circuitous, grandiloquent speechifying. As a result, his words seemed homey and genuine.

When he talked about grandma, grandpa couldn't help being grandiloquent.

But the poor dear complained that language lacked the necessary words to describe her adequately. He wished for more descriptive terms, accompanied by a philharmonic orchestra or an angel choir with brass band, glittering fireworks and a dancing fountain.

Oh well, he made do with a dictionary, a His-Master's-Voice gramophone or the local girl scouts choir with castanets, a set of lit candles and some high-pitched gargling with mineral water.

Bench Carriage? Why didn't they install Lay-Zee-Boy recliners in charabancs, instead?

adjective
1slow to act: he had been dilatory in appointing a solicitor
1.1intended to cause delay: they resorted to dilatory procedural tactics, forcing a postponement of peace talks

Dilatory hastening,
Her breath quickening,
His voice thickening.
"Here it is, darling, your bowl of oatmeal is ready."

Sometimes when he was listening intently to a live report of an important soccer match, she would parade through the sitting room dressed in nothing but a long fur coat. She would halt between him and the radio, pirouette, open her coat to flash him and then quickly run away to hide somewhere in the house.

This impromptu show would instantly dilate grandpa's eyes but his other reactions were all but dilatory. He would pretend to fumble a bit finding his slippers, thus allowing her more time to reach her hiding spot, just to make things a bit more interesting. He would then, without any more delay, give chase. Tallyho!

Switching OFF the radio set would happen quite dilatory. One time when the radio commentator loudly yelled "GOAL", heard throughout the house, grandma said "Oh yes, dear." ...

P.S. Without this WotD entry, I would still have understood dilatory to mean expanding or widening like in vasodilating compound.

Pronunciation: /ˈho͞oˌhä
noun
[in singular] • informal
a commotion; a fuss: the book was causing such a hoo-ha

"Hoo-Ahh!" yelled the marines in response to their commander. Then they went out of the base gates and settled down the hoo-ha by gently dispersing the crowd.

Besides "Tallyho!", grandpa has sometimes been heard to yell "Hoo-Ha!" when hunting and bagging grandma where she was hiding.
Grandma used to reply "Boo-Yah!".

Pronunciation: /ˈvərsəˌfī
verb (versifies, versifying, versified)
[with object]
turn into or express in verse: he versifies others' ideas (as noun versifying) a talent for versifying

Today's a special chance
To get in on the dance.
Make your own solution.
And versify your contribution if you think it is at all possible; well, you decide.

One day grandpa got the luminous idea to versify his lovemaking.

But grandma complained. It took too long, she said.

From then on grandpa just diversified.

1recurring every nine years.
1.1lasting for or relating to a period of nine years.

Today's WotD is brought to you by the number NINE! (courtesy of openclipart.org)

Nine times nine is eighty-one, and Gregor stood proud, having lived through nine national novennial celebrations.
"Nein, nein!" shouted Fritz. "You are just an ordinary octogenarian like me."

Fritz and Gregor shared a common birthdate in spite of being born in different countries. They now occupied matching rocking chairs on the porch at Saint Bartholomew's Home. They were surrounded by old ladies incessantly mumbling novenas for the parade of hearses leaving the gates. It is well that the Latin root was not "quadu" instead. A quadrumvirate would sound less impressive as "quadumvirate."

Are those who visit and join in at IBDoF WotD soi-disant logophiles?

Would we go so far as to claim that four like-minded logophiles joining the same day are a soi-disant quadrumvirate?

Or would they still be, so to speak, four square pegs in round holes, as it were?

by Algot Runeman
Utopia
yo͞oˈtōpēə/
noun
noun: Utopia; plural noun: Utopias; noun: utopia; plural noun: utopias
1.
an imagined place or state of things in which everything is perfect. The word was first used in the book Utopia (1516) by Sir Thomas More.
synonyms: paradise, heaven (on earth), Eden, Garden of Eden, Shangri-La, Elysium; More
idyll, nirvana, God's country;
literaryArcadia
"it may be your idea of Utopia, but it's not mine" It's all in your imagination. What you see as utopia, others will judge more harshly.

[Based on the screenshot above, the delivery of today's WotD did NOT illustrate utopia well. Refusing to accept cookies?! I've never refused a cookie. A world without cookies, unimaginable.] The rufous squirrel scampered up the hemlock. He didn't hang out with the bigger grey squirrels.

Pronunciation: /əˈvəNGkyələr
adjective
1of or relating to an uncle.
1.1kind and friendly toward a younger or less experienced person: an avuncular manner
2 Anthropology of or relating to the relationship between men and their siblings' children.

Avery avers that he has an aversion to his avuncular ascription.

Pronunciation: /äd
noun
• historical
a hypothetical power once thought to pervade nature and account for various phenomena, such as magnetism.

It may have been a response to living on the pine barrens that Baron Dr. Karl Ludwig Freiherr von Reichenbach chose the odd term od for his proposed hypothetical power. On the other hand, maybe he had just carried around too many magnets in his hat during his youth.

Grandpa treated the pigeons in his coop in an avuncular manner.
Though he had no rufous birds, he named his favorite homing pigeon Rufus.

He did believe that his birds navigated by the earth's magnetic field, but he was at odds with Baron von Reichenbach's od. He considered that a tall story first spawned by Baron von Münchhausen.

Pronunciation: /ˌskripˈtôrēəm
noun (plural scriptoria /-ˈtôrēə/ or scriptoriums)
chiefly • historical
a room set apart for writing, especially one in a monastery where manuscripts were copied.

English teachers visit the library computer lab with their classes to have students write and edit their assignments. I guess that makes the computer lab into a sort of modern scriptorium.
All times are UTC-05:00
Page 209 of 396